ON THE MISSION OF 14 MARCH 1945, the Fifteenth Air Force dispatched 848 bombers against targets in Austria, Hungary and Yugoslavia. The 301st and 97th Bomb Groups used visual aiming to drop 193 tons of bombs on the marshaling yards in Komaron, Hungary, 20 miles from German lines. The 32nd Bomb Squadron was assigned this mission and I was the tail gunner on "Miss BeHaven" plane number 44-6407. 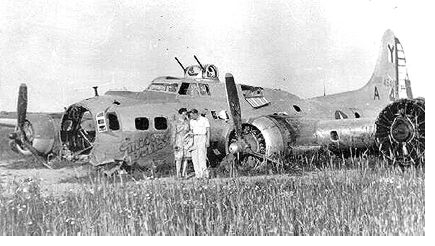 Early that morning, after a light breakfast and briefing we departed Italy on our bombing mission to Komaron Hungary. We encountered heavy flak before reaching the target and were forced to drop our bombs prematurely due to our loss of power. With one engine out and two others with reduced power we were forced to attempt reaching Russian held territory in Poland. Keeping altitude was our immediate concern in reaching the front lines between the German and Russian ground forces. Somewhere near Myslenice south of Cracow our situation became serious and at an altitude of approximately 1500 feet Lieutenant Walter Podasek, the pilot put our plane on auto pilot and we bailed out. Due to ground fire, believed to be from the Russians, we were forced to ocillate in our chutes to avoid ground fire. Luckily, no one was hit, however the ocillating made the landings difficult. Knees were dislocated and some landings were in trees, steeples and rooftops. Russian forces believing we were paratroopers captured and jailed us even though I had an 18 inch square American flag with me and called out that we were "Amerikanza." Jailing lasted a couple of days however our Pilot, Lieutenant Walter Podasek spoke Polish and helped to arrange our release. We were then on our own, using bicycles, truck or on foot to Odessa Russia. Odessa was a collection point for downed Air Personnel. We arrived back at the 32nd Squadron's base in Lucera, north of Foggia Italy by ocean freighter via the straits of Bosphorus, Crete to fly another day. It was the crew's belief that Miss BeHaven had been destroyed in the crash. Fifty two years later in 1997 information was received from Michal Mucha and Szymon Serwatka of Poland that our plane had continued to fly crewless for 300 kilometers. It had belly-landed in a field in a manner a real pilot could not have handled better. The landing location was between Krotoszyn and Ostrow south east of Poznan. (Michal and Szymon are conducting a WWII Aircraft MIA project in Poland) Their Home Page Internet address is http://www.samoloty.ip.pl/amiap/

THE PHOTOGRAPH ABOVE is of our belly-landed Miss BeHaven, taken in the summer of 1945 at the landing location. You can see the aircraft was being cannibalised by the locals at that time. The damage from the landing and flak is visible. Also note the pilot had feathered two propellers prior to their bail out. 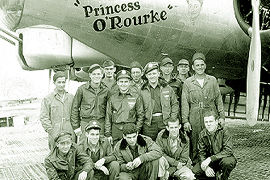 ON THE 20TH OF APRIL, 1945, the Fifteenth dispatched 783 bombers, including a formation of 132 B-17s that dropped 388 tons on the Vipetino Marshaling Yard. The 301st and 2nd Groups put 91 percent of their bombs within 1,000 feet of the aiming point. Eight B-17s were listed as missing, including two from the 32nd. The unit encountered very accurate flak that hit 1st Lt. Howard Bower's aircraft, number 44-6737, in the number 4 engine just prior to bomb release. The crew bailed out and became prisoners. Meanwhile, 1st Lt. Robert Adams, flying the "Princess O'Rourke," number 44-6347, of the 32nd, fell back from the formation after the target. Apparently hit by flak, Adams flew towards France, but was intercepted by Swiss aircraft and was instructed to land. "Princess O'Rourke" became the only bomber of the 32nd Squadron and the 301st Group to be interned during the war.

SGT. HAROLD B. WHITBECK, a crew member on both of the missions, describes his recollections of the events narrated above: "Following our bailout of 44-6407 over Poland and capture by the Russians a few weeks earlier, with our regular crew piloted by Lt. Podasek, we were returned to our base at Lucera, Italy, just north of Foggia. Preceding the mission to Vipetino we had a "milk run," where we bombed the "front lines" in Northern Italy. We fired our guns at ground level at anything that moved. On our second mission after our bailout, we were scheduled to bomb the Vipetini Italy Marshaling Yards in the Brenner Pass. Stories were told that the ground gunners could fire downhill at you from the mountain sides. We left with the full compliment of enlisted men, but with a different officer crew. Our ship was piloted by 1st Lt. Robert Adams, whom we did not know previously and from whom we've never heard since. The enlisted crew consisted of Gus Burnham, right waist gunner, Fred Rasmussen, left waist gunner and radio, Vince Gamel, nose gunner and Joe Orman, ball turret. At the target we were hit by heavy flak, verifying stories of accurate fire from the ground and the mountainsides. We lost one engine on the right side of the "Princess," plus loosing power on a left-side engine. After dropping our bombs we lagged behind, and unable to stay with the formation, the Pilot radioed the Command and we headed for France. We were then intercepted by Swiss fighters and forced to land at Dubendorf, where we took out two or three fences before we stopped. We were photographed, fingerprinted, interrogated and taken to Adelboden and the "Nevada Palace." Our treatment was fair, allowing us freedom during the daylight hours, but off the streets at dark. We were not required to be at the hotel at night. Their food was generally less than desired, bland and often cold. Regimentation was lacking, but generally Swiss treatment was good. This was the last mission flown by the 32nd against an enemy in World War II. The war ended three weeks later, May 8, 1945, and I returned with the crew to the United States for further assignment."