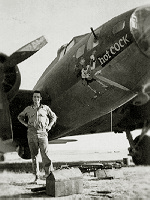 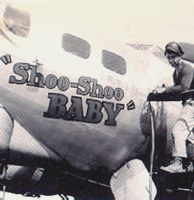 GENE TOWNSEND joined the 32nd Bomb Squadron at Geiger Field in Spokane, Washington, shortly after the 301st Bomb Group was formed in February 1942. He had just completed training in engineering at the Boeing B-17 plant in Seattle prior to his assignment.

GENE HAD DONE art work before entering the service; so once we were all at our base in Chelveston, England, in September of '42, it fell to him to decorate the 32nd's planes. The first plane painted was "The Bad Penny." When asked why such a name, the whole crew replied "A bad penny always returns." (Sadly, this was not to be, however.) This was the beginning of nose art for the 32nd, and by the war's end, Sgt. Townsend had painted over 40 planes, with such names as "Hun Pecker," "Sleepy Time Gal," "Lead Foot," and "The Goon." The squadron moved to North Africa with the 12th Air Corps, and eventually to Italy with the 15th. During these campaigns there were many times that he did his work under adverse conditions and with very limited materials. 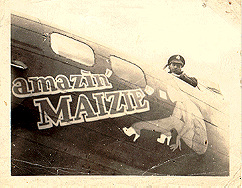 AIRCRAFT NOSE ART provided a way for both the air crews and ground personnel to personalize their "baby"; to make it different from other planes in the squadron, or anywhere else. It was all up to the talent and imagination of the men who flew and maintained the planes. Few 32nd Bomb Squadron crew members or ground personnel would know a plane as "42-1398" or "44-6180," but they all knew and talked about "Amazin' Mazie" and "Slick Chick." And nose-art inspiration came from almost everywhere: wives, girl friends, cartoons, movie stars, and even some from crew chiefs. It was a time when almost anything was allowed to be painted on a plane, and this kind of expression was seen as a way to boost morale and the squadron's efficiency.

FROM ANDY ROONEY, of today's "60 Minutes," there's a wonderful quote in an August 1943 issue of Stars and Stripes about this very special art form: "Grim-faced Luftwaffe pilots, proud of the guts that take them within the suicide circle of a fortress formation, determined to do or die for the Fatherland, must wonder what the hell kind of air force they are up against. They come diving in, teeth clenched, hell bent for Hitler and along with a hail of lead are greeted by the stupid grin of some absurd comic-book character, 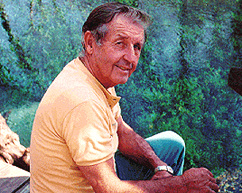 or the nude form of a pretty girl painted on the nose of the bomber they are attacking...." The art was "something else," and Andy Rooney was Andy Rooney even then.

TODAY GENE TOWNSEND and his wife, Pat, make their home on the St. Croix River, across from Canada, in Calais, Maine, and spend their winters in Saint Augustine, Florida. Although retired, Gene still enjoys painting and also looking back these fifty years and more and reminiscing with his buddies about their experiences and travels in WWII.