Sgt. Robert E. Richards Had Delayed Return to Base

15th AAF IN ITALY-- Blechhammer, Germany is only about four hours away from southern Italy by heavy-bomber, but S/Sgt Robert E. Richards, R.R. 1, Grabill, Ind., tail gunner on a 15th Flying Fortress, found out the hard way that it can take 52 days to get back --if you're lucky! 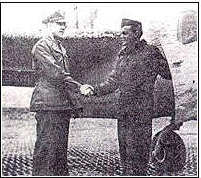 ON THE DAY AFTER CHRISTMAS during an attack against the oil refineries at Blechhammer, Richard's Fort was ringed with flak from the multitude of ack-ack guns protecting that vital target area. Several near misses stabbed the ship with flying steel, and disabled the oxygen system, the hydraulic system and all the instruments, including both compasses, which left the crew isolated in space.

THE NAVIGATOR'S COMPUTER was shot from his hand, and the radio operator lost his transmitter key in the same abrupt fashion; the emergency rations were peppered, most of the parachutes were shredded beyond utility and the gas tanks were riddled. One burst put the bomb racks out of commission and for the next few hours, while Richards was splicing severed control cables, the bombardier balanced on the narrow catwalk kicking out bombs to lighten the load.

BECAUSE ONE ENGINE and the wing behind it had caught fire, the pilot pulled away from the formation to minimize the danger to his squadron when the explosion the anxious crew all expected should occur. But after a fifteen minute reign of terror the fire died and after several attempts the gutted engine feathered. On the three remaining power plants, all of which were wheezing and coughing in agony the pilot and co-pilot together managed to limp the tattered Fort over 150 miles of hostile territory and land just two and a half miles behind the Russian lines at a fighter field.

AFTER A PERIOD of welcome recuperation at this stop, Richards and his crew were taken to an evacuation headquarters for Allied airmen. Here they were picked up and flown back to their base in Southern Italy.

"It was the rough way home all right" commented Richards, "but we were lucky to land in Russian hands. They made sure we had the best of everything they could give us!"

THE 21 YEAR OLD graduate of Huntertown High School at Huntertown, Ind., who wears the Air Medal with two Oak Leaf Clusters is a veteran of 25 sorties over priority targets in Germany and the Balkans. He was employed as a stock accumulator in building 4-2 of the General Electric Co. plant in Fort Wayne from September 1941, until he left to enter the AAF on January 22, 1943.

HE COMPLETED telegraph and telephone school at Camp Crowder, Mo., on July 17, 1943 and won his wings at Las Vegas, Nev., on May 6, 1944. After leaving the United States on August 8, 1944 he flew his first mission, an attack against Barovincia, Yugoslavia on August 26.

HIS WIFE, Mrs. Glada Marie Richards and their two children, Allen, 2, and Nadine Fay, a recent arrival, reside at the above address while his parents, Mr. and Mrs. Charles W. Richards, reside at R.R. 1, Fort Wayne.