Last night, Flying Fortresses raided the Nazi submarine base at St. Nazaire. These giant bombers are rapidly becoming as well known over here as in America. ROBERT CAPA here tells in words and pictures the story of one such raid by the Forts of the 301st Bomb Group and the 32nd Bomb Squadron from a base somewhere in England.

Three and a half years ago, these boys who are now flying the Fortresses knew very little about Europe and crises and Hitler; little about France and nothing about Flying Fortresses.

They knew, perhaps, that their fathers had had a good time in France and some of them may have thought that when they had finished their time in college, they would make a short trip there.

Then, one day in September, 1939, while listening to the radio, an announcement between a Bob Hope programme and the latest football results told them that war had broken out again. They didn’t pay too much attention to it, however, and spent the next nine months just as they had always done. Then the newspaper headlines and the radio grew frantic again. France had fallen and England was about to go, too; nothing but the Atlantic, it seemed, separated that bad man from America.

The boys were still more interested in their football games and their girlfriends, but went and joined the American Army Air Force. They were eager to learn their jobs and did much flying above the high mountains of California and the plains of the Middle West, learning to drop dummy bombs correctly and exactly on dummy targets.

Then one day the radio ceased to broadcast football results and their girlfriends were left waiting in vain early that Sunday morning the Japs had attacked Pearl Harbour and on the following day America was at war with the Axis.

Many of those young men were already stationed in Pacific bases and were killed on the very first day. Others took off from their bases to patrol Pacific waters, praying for the opportunity of having a crack at enemy submarines.

They were still patrolling when they heard the story of Captain Colin P. Kelly, who had been training with them at the same airfield and who had dived his aircraft straight at the Japanese Battleship, becoming the first hero of the new American Army Air Force. They were mad with rage and boiling to get into the battle themselves.  Finally, came the order to get ready, but instead of flying west the formation took off towards the east, and two days later they landed on the grey, cold coast of Newfoundland.

After a short rest they took off again. And twelve hours later they were having breakfast with the old-timers of the R.A.F. in England. Talking with the boys in the blue uniforms soon made them realise what it meant to have been at war for three years. They heard the names of Kiel, Hamburg, Berlin, Cologne, Essen, Brest and St. Nazaire. Soon after that, they learned much more; they quickly prepared for operations and went to Abbeville, Lille, and Meaulte. One plane was lost and they shot down ten and probably nine enemy aircraft.

It gave them pleasure to look at the photographs of their bombs bursting in the middle of the targets it really seemed then that the American eagle had joined the British Lion. Often they had been called in the middle of the night for briefing, and then bad weather has made flying impossible, and the raid has had to be cancelled. On one occasion their disappointed faces were too much for the colonel. Never m=ind boys, you get a credit for that mission, said the colonel.

How's that, Colonel? Asked one of the sergeants.
"It has been laid down that any one that gets briefed gets credit for a mission, even if he doesn't go"; said the colonel.
That credit sure hits the hell out of the Germans, don't it colonel?

They returned to the mess, picked up the packs of well-used playing cards, re-read for the twentieth time their last letter from home, and put on again the worn-out record of From the Mountains of Montezuma to the Shores of Tripoli.

At the following morning the crews were briefed again. The same colonel got up and said; "Your attention, please," And then went on.
"This afternoon when you return you will find an officer standing here by this black-board. You will report your arrival so that we can arrange for interrogating you. You will kindly wait for interrogation in the room where the coffee and Scotch are served."

"You will, of course, have heard about this target before - it is St. Nazaire. The R.A.F. have bombed it many times before, but it is more important now than ever before, since it is from St. Nazaire that the Nazi U-boats go out to attack the convoys to North Africa."

For the fraction of a moment the boys' faces were grave and serious. Then, with typical American nonchalance they strolled back to the mess to await the announcement which would send them hurrying to their aircraft.

They seemed to be extraordinarily indifferent about it, both by action and word some of them sat down in their flying kit to the bridge games that they had been playing the night before.

Then the face of one bombardier suddenly brightened. I have discovered the recompense for getting up early in the morning he declared to the mess at large. We can hear the evening radio programmes from California.

Then everybody grew excited, as suddenly and unexpectedly they heard the voice of Bob Hope. For a moment the bridge and the mission ahead of them were forgotten, and they crowded around the small radio set to listen to the programme.

Then the announcement: To your planes, drowned the radio programme, and a moment or so later, the voice of Bob Hope was cracking jokes to an empty and silent mess-room.

From the control tower I watched them taking off. Beside me was the intelligence officer who, in the war of 1914 - 18, was a flying ace with the famous Lafayette Squadron. We saw the shining Fortresses taking off one by one, with the regularity of soldiers at a parade ground drill. Then he turned to me and said "The way those kids get on with the job, without any gestures or fuss, makes us the adventurers and heroes of the last war very envious, and very proud."

They come back, sometimes with one engine turning, or landing in the drink, but they always come back, like the 32nd Bomb Squadron's proverbial "Bad Penny". When the interrogation is over they don't say much about what they have been through.

Last time one of the ground crew couldn't hold himself back any longer and stowed away in one of the Fortresses. We never would have found out if the plane hadn't landed in the drink in mid-Channel. He saved half of the crew. We had to punish him a little of course but at the same time we recommended him for a decoration.

It was not long before the Fortresses returned from their short trip. There were some holes in the machine, but none was missing.

The pilot of the "Bad Penny", climbing out of the plane, recognized me and grinned broadly. He said "After this is over, the longest trip I'll ever take will be from my house to the nearest river on my bicycle, with my fishing gear on my back."

THE FOLLOWING CAPTIONS DESCRIBE FIVE ASSOCIATED USAAC PHOTOS IN THE ARTICLE "A SHORT TRIP TO FRANCE", by ROBERT CAPA.

"Before sailing for Britain Capa made a deal with The Saturday Evening Post, because the Post published both black-and-white and colour photographs, in the hope of luring readers away from the monochrome Life magazine." (He had worked for Life previously, but had fallen out with them about their reluctance to publish colour photographs and their lack of respect for his ability). "During his 1942-1943 stay in Britain - at which time Capa was working for Collier's Weekly Magazine, which also published colour photographs - Capa often carried two 35mm cameras, one of them loaded with colour film. He sometimes switched back and forth so quickly that the only differences between the resulting images is the element of colour." "Once Capa arrived in Sicily to cover the allied invasion, in July 1943, he abandoned his use of colour film for the rest of the war." The following photo of Wabash Cannon Ball is one of his many Colour photos taken during the war. 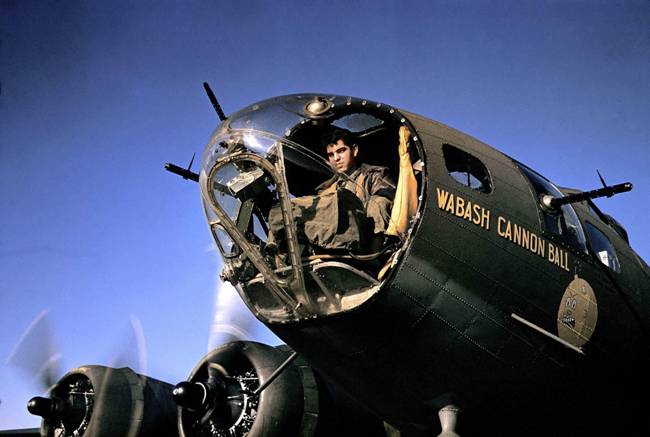 Wabash Cannon Ball
Zero hour for the Flying Fortresses is here. In the front turret, the gunner is on the alert, for St. Nazaire is the target, and fighter opposition is anticipated. In a moment now the 32nd Bomb Squadron bomber, christened "Wabash Cannonball," will be airborne. 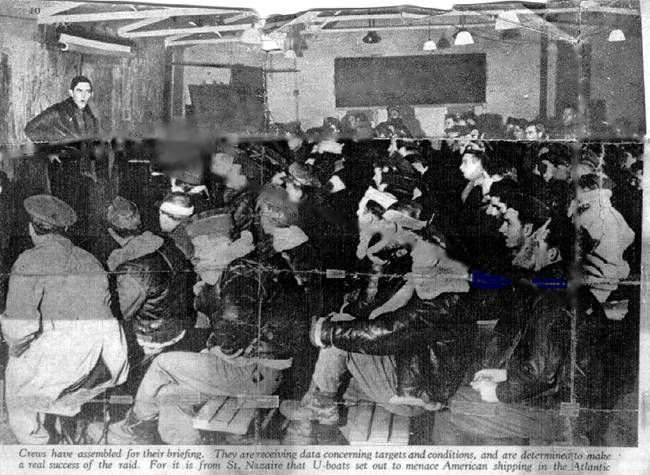 Main crew briefing
Crews have assembled for their briefing. They are receiving data concerning targets and conditions, and are determined to make a real success of the raid. For it is from St. Nazaire that U-boats set out to menace American shipping in the Atlantic. 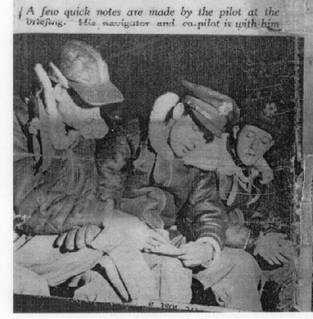 Pilot taking notes
A few quick notes are made by the pilot at the briefing. His navigator and co-pilot is (sic) with him. 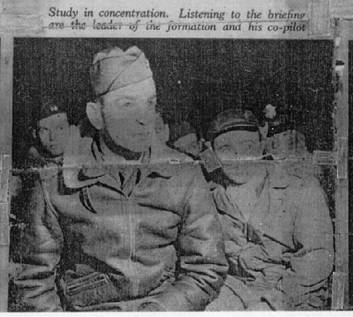 Leader in foreground
Study in concentration. Listening to the briefing are the leader of the formation and his co-pilot. 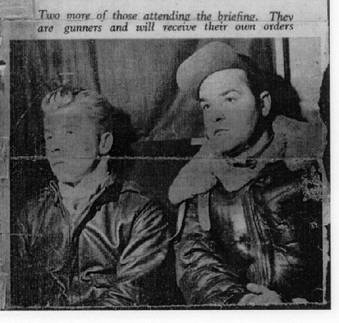 Two young men
Two more of those attending the briefing. They are gunners and will receive their own orders. 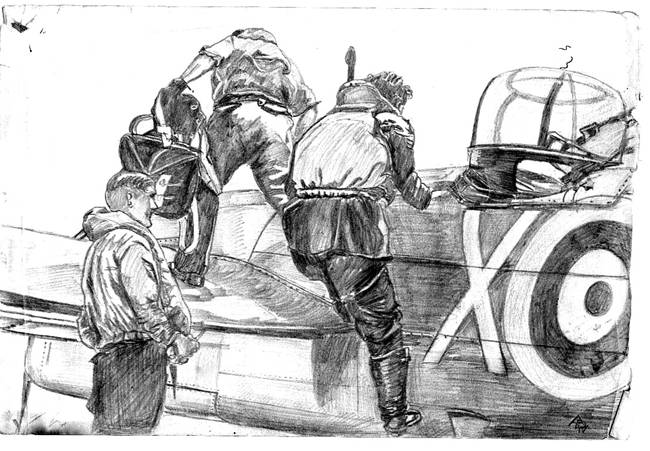 Arthur Weeks pencil sketch of a Royal Air Force Blenheim Bomber Crew
Arthur's opportunity to paint the "Wabash Cannon Ball" nose art fell between his return to UK from a year long Iceland posting on September 23rd 1942 and the Illustrated Magazine date of December 5th 1942. Records show that he was first posted to RAF Wilmslow, Cheshire and then to RAF Pershore, Worcestershire - both England, UK. It seems likely that his RAF Wilmslow posting was of short duration and that his encounter with 32nd Bomb Squadron's "Wabash Cannon Ball" was at RAF Pershore. stanweeks2004@yahoo.co.uk

This account was transcribed from original newsprint by Stan Weeks of Wales, UK. It originates from a magazine article carried by his father Arthur Douglas Weeks (1913 - 1985) during WW2. Arthur, a corporal in the Royal Air Force, was the wartime artist who painted "WABASH CANNON BALL" and the "Angry Bomb" nose art on the Flying Fortress featured in the article.

Corporal 1007677 Weeks served with the R.A.F. as a fabric worker from 1940 to 1946 and was a painter, decorator & sign-writer in civilian life. He was a capable amateur artist, as once evidenced by his colourful Walt Disney nose art cartoons on Stan's bedroom walls during the forties.