A see-saw series of battles for control of Libya and parts of Egypt reached a climax in the Second Battle of El Alamein when British Commonwealth forces under the command of Lieutenant-General Bernard Montgomery delivered a decisive defeat to the Axis forces and pushed them back to Tunisia. After the late 1942 Allied Operation Torch landings in North-West Africa, and subsequent battles against Vichy France forces (who then changed sides). Hitler finally decided to bring Rommel home to Germany due to his illness after the Germans loss at El Alamein with the British.

On May 13 1943, German and Italian troops surrendered in North Africa. In the last week of April, the British swept through all enemy resistance as the US Forces maneuvered through the hills, while being inflected with heavy casualties, but emerged victorious. Since the Supplies had run out the Axis troops were starving and out of ammunition, the Allies Forces attacked the Axis convoys to prevent any reinforcements and supplies reaching them. In the beginning of early May they unleashed a Flurry of artillery shells before moving in the Soldier and armor Into Axis held positions.

General Omar Bradley in the end the US lost 47 tanks. When they broke through, it was like a dame breach with a great force that they flooded into Tunis the capital city, completely surprising Jerry who put up a resistance until they literally ran out of fuel and ammunition, as the Germans stood defenseless. On the 12th and 13th of May after 3 long exhaustive years of fighting, the Afrika Axis Korps surrendered. In Tunisia alone Jerry lost 40,000 men and gave up 275,000 POW's, Italians included. The British had 35,000 casualties, the French 16,000 and the US Forces 14,000.

The 301st Bomb Group along with the 32nd Bomb Squadron dropped the below safe passes by the millions. They were successful because the Italians (see below) saw that the defeat was real and gave up by the hundreds of thousands. 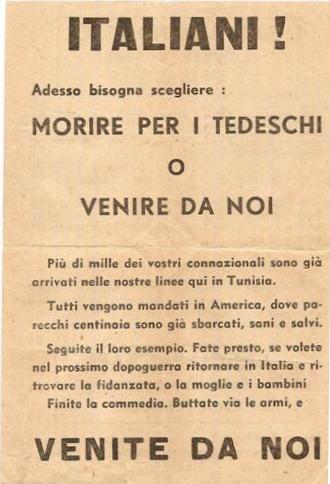 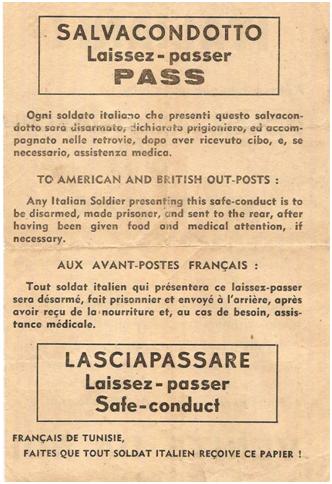 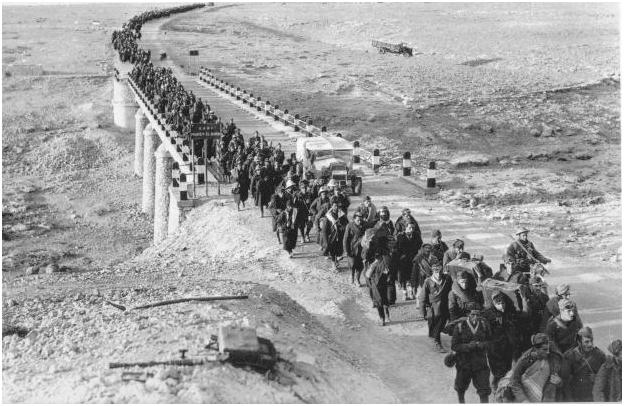